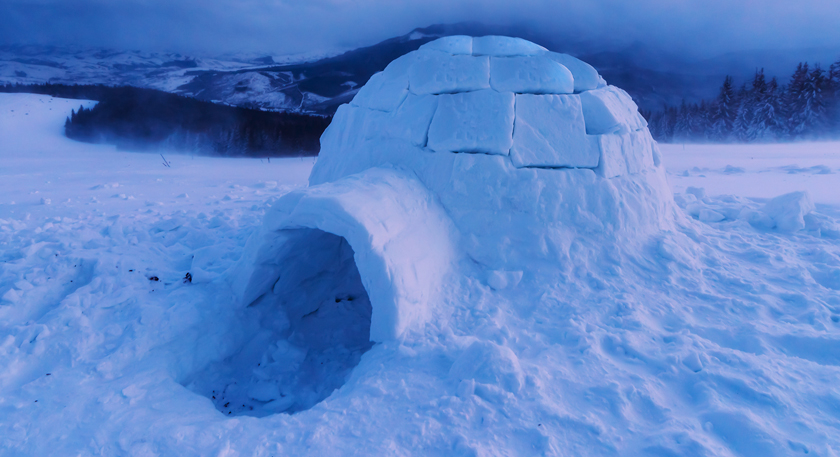 It may seem implausible but using semi-frozen water (snow) is one way to stay warm in freezing weather. Experienced backcountry campers or even the backyard builders in your classroom know that using snow to build winter shelters, like igloos, quinzhees, snow trenches, or drift caves, isn’t just fun but are also excellent insulators that can block frigid wind and trap heat.

The Inuit, aka Eskimos, invented the igloo centuries ago. And while students are chillin’ in their backyard igloos, they may ponder questions like—why isn’t this structure melting? How come I’m not turning into a human icicle? Why isn’t the snow cooling down the igloo inside? Why isn’t the wind wrecking the igloo? Insightful questions like these can help students warm up to your lesson plans on heat transfer, density, compression, force, geometry, and more.

We’ve carved out a few essential facts to help get you started.

How do igloos stay warm?

An insulator is a material that slows the transfer of heat energy from a warm mass to a cold mass. Having a strong, well-insulated igloo requires two layers of ice. Ice's thermal conductivity is low, meaning it doesn’t let heat pass through easily.

The first ice layer is created simply when the sun melts the snow outside the igloo into a tiny water layer that freezes overnight.

Creating the second ice layer on the inside takes a little effort. A heat source (e.g., body heat, oil lamp, small fire) is placed inside, slowly melting the snow block's ice crystals. Once all the walls are wet, they’re exposed to cold air from the igloo’s entrance, creating another layer of ice on the inside. A ventilation hole is added to the roof for better circulation.

If you keep the ice below its melting temperature, these layers add strength and insulation to the structure. Inside, igloos vary in internal temperature from around 19o to 60oF. Ask students to consider how it takes time for an ice cube in a drink to absorb enough heat to melt.

Convection transfers heat through the movement of air; it is the key form of heat transfer in liquids and gases.

The density of molecules determines how they move and transfer heat; warm, less dense air rises, and cold, dense air sinks (convection current). Well-constructed igloos don’t have tiered bottoms (instead of flat) to take advantage of the convection current. There is a higher tier where people can hang out in the warmer air and a bottom tier to serve as a "cold sump" or storage to trap the cold air.

The convection current allows radiated heat from the heat sources to circulate inside the igloo, increasing its internal temperature. The ventilation hole, mentioned earlier, allows excess convection currents to leave the igloo and facilitate heat transfer.

Additionally, igloos are built with blocks of compressed snow and ice. Although hard, the blocks still have air bubbles trapped inside; after all, 95% of snow is air trapped inside tiny crystals. The air molecules trapped between the tiny ice crystals create air pockets, which act as insulators that prevent heat loss due to convection.

The tunnel at the entrance also helps keep the igloo warm. Since the igloo entrance is at the bottom of the structure and has at least one right-angled part of the tunnel, strong, cold winds can't blow directly inside.

Most igloos are built using a catenary arch. A catenary curve is the shape of a flexible hanging chain or cable, resembling a paraboloid (a quadric surface with exactly one axis of symmetry and no center of symmetry). Over time, as it compresses, an igloo keeps its catenary shape and becomes shorter. You can help students see how catenaries and related curves are used in architecture and engineering to build strong structures (e.g., bridges and arches).

The igloo’s snow bricks start 4-sided but are often cut into five or six-sided shapes to increase structural interlocking like the polygonal stones used by Incan engineers who built Machu Picchu.

Use hands-on activities to help students develop a deeper understanding of what they learned. The following activities focus on force and equilibrium as essential components for building structures.

Students will explore the catenary arch and its forces in this hands-on lab activity.

Where does the St. Louis Gateway Arch get its unusual shape? The shape is the same as the natural shape of a sagging chain held at both ends—also known as a catenary. Students see firsthand the strength and stability of this arch type and where it might be useful, like for building igloos.

The Standing Catenary Arch Kit includes seven wooden blocks that students assemble to build a catenary arch. This activity engages students in learning engineering concepts such as balancing force and load transfer through the arch assembly.

The perfect companion to the Catenary Arch activity.

No glue—no mortar, just like building an igloo. Demonstrates the physics behind real-world structures so strong they’ve “held up” for over 1,700 years. With this hands-on kit, students learn how force vector analysis is used in architectural strength—just like the ancient Roman structures. Students first analyze the Roman arch, the catenary arch, and the corbeled arch. They then use the blocks provided to build a model Roman arch. How strong is the structure? You’ll have fun testing its strength. How about a bridge-building contest?