Get Your Free Activity

The Greek mathematician and physicist Archimedes noticed, while he was taking a bath, he could determine the volume of an object by the amount of water it displaced. By dividing the weight by the volume of an object and comparing it to gold, he could distinguish between real and fake gold. Who can blame Archimedes for running through the streets shouting “Eureka” (I have found it)!

Today, density is a fundamental concept in physics and engineering. It helps explain the mass of an object and determines whether something will float in a fluid. Density is one of the most important things you can know about a substance. It’s a weighty topic that students can really sink their teeth into.

The Density Column activity demonstrates several scientific concepts, including solubility, diffusion, immiscibility, hydrophobicity, and the relative densities of solid objects. Download the activity to put your students in the thick of it.

Understanding the density of substances is critical for various fields, including engineering and technology for applications like ships and submarines, oil spills, plumbing, and airplane weight distribution. It’s even evident in everyday activities like walking down the salad dressing aisle at the grocery store. The layers of oil and vinegar in the vinaigrette bottles just don’t mix because the oil is less dense than the vinegar.

The concept of density plays a crucial role in the transportation of the world’s supply of fossil fuels. Millions of barrels of oil are shipped around the world in oil tankers daily. Unfortunately, vast amounts of oil are accidentally spilled into the ocean, causing enormous damage to the ecosystem. The scientific factors that affect an oil spill's ability to spread once it spills include surface tension, specific gravity, and viscosity.1

What is specific gravity?

Scientists and engineers use oil’s density to help identify solutions for cleaning up these dangerous spills. The EPA describes two common cleanup solutions that rely on the fact that oil floats on top of the water are

1. Skimmers - A machine that removes floating oil and grease from liquid. The floating oil adheres to skimming media, such as a belt, tube, rope, mop, or disk.

2. Sorbents - Materials that soak up liquids. They can be used to recover oil through absorption (pulling in through pores) or adsorption (forming a layer on the surface), or both. Absorbents allow oil to penetrate pore spaces in the material they are made of, while adsorbents attract oil to their surfaces but do not allow it to penetrate into the material. To be useful in combating oil spills, sorbents need to be both oleophilic (oil-loving) and hydrophobic (water-repellant).

Sounds a little like using a paper towel to blot up grease floating on top of your pizza, huh?

Your lesson plans can be an intriguing way to help students see how “density matters” in real-world applications. The Density Column activity can be a great way to get them started on the basics. 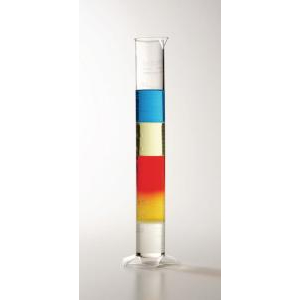 Students prepare a column of five liquids, each of which has a different density, and will then compare the density of various small, solid objects by dropping them into the “density column.”
Shop Now 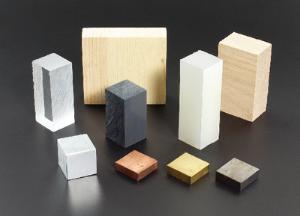 Students will observe that although each block has approximately the same mass, the size of each block is different because the density of each is different.
Shop Now 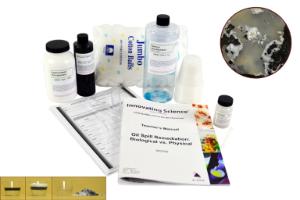 Students compare two methods of oil spill cleanup: biological and physical. Students draw conclusions about the effectiveness of each approach.