a. Plan and conduct an investigation individually and collaboratively to produce data to serve as the basis for evidence, and in the design: decide on types, how much, and accuracy of data needed to produce reliable measurements and consider limitations on the precision of the data (e.g., number of trials, cost, risk, time), and refine the design accordingly. (HS-PS3-4)
b. Analyze data to support the claim that Newton’s second law of motion describes the mathematical relationship among the net force on a macroscopic object, its mass, and its acceleration. (HS-PS2-1)

The topic of study for these lessons is projectile motion, taught during the two-dimensional motion unit, which also includes circular motion concepts. The first lesson will consist of finding the maximum height of a projectile. The projectile, a film-canister, will be launched utilizing a ratio of baking soda & vinegar as a propellant. Students will test different ratios of baking soda & vinegar to find which combination allows the projectile to reach the highest maximum height.

The second lesson will allow students to test which launch angle will produce the maximum range of their projectile. In theory, a projectile launched with an angle of 45 degrees provides the greatest horizontal distance of travel when launch and landing are on the same horizontal plane (this is an important logistical part of the investigation). Students will utilize the same ratio of baking soda & vinegar that provided the greatest height in their first investigation.

Maximum height of the projectile will be found using video analysis. The frame rate (frames per second) will used to calculate the time for the projectile to reach its maximum height. Range will be measured using a metal measuring tape. Students will be grouped according to similar abilities.

I also fashioned a cardboard launcher for part II of this lab. It had a protractor attached so that students could adjust for different angles fairly quickly. Instructors can have students devise their own angled launch methods or create a class set for them.

Learn more by downloading the activity plan above. 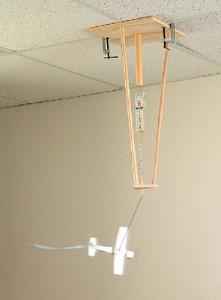 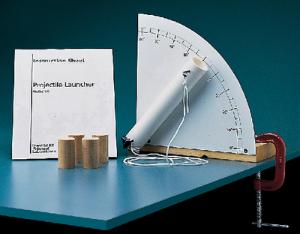 Consistent, measurable results are achieved every time with this economical demonstration. Students set-up and manipulate the launcher to observe and record the established projectile motion. Illustrate how launch angle, launch velocity, spring tension, and strength all effect projectile motion.